We are proud to announce new platform features:

11 April 2018- vidaXL soon to be launched for Lightspeed,Magento

We are proud to anounce new platform features:

Again, we have added new platform features to make the sync platform even better!

We are proud to anounce new platform features:

It has been a great year for webshopimporter and we would also like to share some of our achievements of this year:

NEW product announcement and ETA:
We are glad to introduce our new software product: Magstudio 2015 next year. The new site and product features and description should be ready around February 2015.

We know that Magento is a complex e-commerce system. That is why we reduced code and processes to drag and drop and clicks. This is a visual studio which will be free available with some exceptions. This product will integrate with live-sync and eases your workflow when working with Magento. More details will follow up. 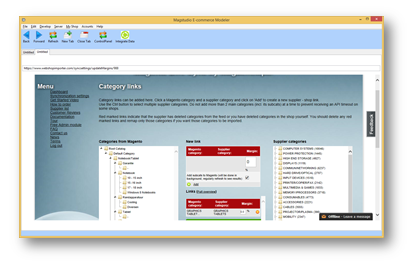 We have added support for the following NEW supplier: QWERTY B.V.
Qwerty B.V. is a fast growing harware, components and mutlimedia distributer in the Netherlands.;

We have added the following NEW supplier: WAVE-Computers.
General optimizations and compatibility improvements were made to various feeds for better performance. Coming months we will start focussing on resell and license possibilities for webdevelopers.

First off, the Magdeveloper.com team wishes you a very happy and succesfull 2014!
We are very proud of what we were able to achieve last year, building a new, robust, and super easy to use product import platform that eases the import proces for a vast amount of e-commerce companies around the world. More and more, smaller and larger companies have adopted Live-Sync as their prefered choice of data-import technogy. We will continue to improve the system perfomance wise, add new suppliers and constantly keep adding new features. -The last few months we have added new suppliers to the system: Synnex, Ingram FR, Gameformule. -2014 will bring advance Import reports with statusses and we will focus on licensing our technology to third-party develeopers and webdevelopment studios. Happy selling :)

-We have further improved Icecat compatibility for use with e.g. Ingram Micro.

The last two months we have been working very hard on several new platform features to improve your import expercience:
-Live-Sync will now automaticly import attributes such as EAN and Manufacturer into your shop which can be used e.g. for Google Shopping or other listing directories. This is a huge achievement because attributes can offer a whole range of new possibilities with other third-party modules.

We have now added Smart Supplier data-checking before any feed gets imported into webshops. In case that any data export from suppliers fails, the shop will not be updated with the corrupt feed. Also we have completely re-written and improved the update routine of products and product urls. Best thing about Live-Sync: All customers will now automaticly benefit from this update!

We have now implemented a new feature that will show you all the import statuses of your connectors! Also, we have fixed an issue where in some cases product margins were not correctly updated.

Dear Live-Sync user, first we want to wish you all the best and e-commerce succes for 2013! :)
We are happy to anounce that we have now implemented multi-image suppoprt for Nedis. When available, there will now be multiple images shown on the product details page.

This week we will implement a new data monitoring system that automatically checks and monitors all your connectors!

We have significantly improved the update speed of products after first the time import, now our update routine checks even smarter which products to update and which not.

We are proud to anounce that Eropartner has been released!

We are proud to announce that Nedis has now been integrated with Live-Sync.

19 October 2012 - Multi-platform and multi browser to support your business process at the office or on the go.

It has been a long road to develop our new core technology. Starting with our Universal Product Importer, built as a client software tool
in 2008 we developed the extended online version. With new platforms available we made sure that Live-Sync is now accesable from
other platforms or browsers as well.